It gives me great pleasure to kick off a ‘column’ on behalf of the Heritage Committee. We’ve fairly recently put together our little team and the first question that came to mind was: Perhaps we should tell people what the heritage committee do, so let me try to explain.

The heritage committee consists of four members: headed up and chaired by John Wheen, he’s pulled together several of us to help bring the committee to life. Our function is to preserve the history of the Company by collecting, annotating and cataloguing the written and visual records covering all aspects of the Company’s activities each year.

One of our first tasks was to understand what ‘Treasures’, magnificent pieces of history that our Company owns. I bet you’ve not looked at the heritage area of our website (although hoping you will after reading this article). Within that section, you may be surprised to see a fabulous collection of over 30 items that we own – from Loving Cups, to Busts and Sterling Silver Punch bowls. In fact, hopefully, those of you who attended the most recent Great Event, The Installation Dinner, on Monday 7 March 2022 at the wonderful Clothworkers’ Hall, had the unique opportunity to view close up a small selection of them which we displayed in public for the first time.

The two pieces I will cover in this article are the Bowden Bust and the Original Loving Cup given by Past Master Tony Bellm. 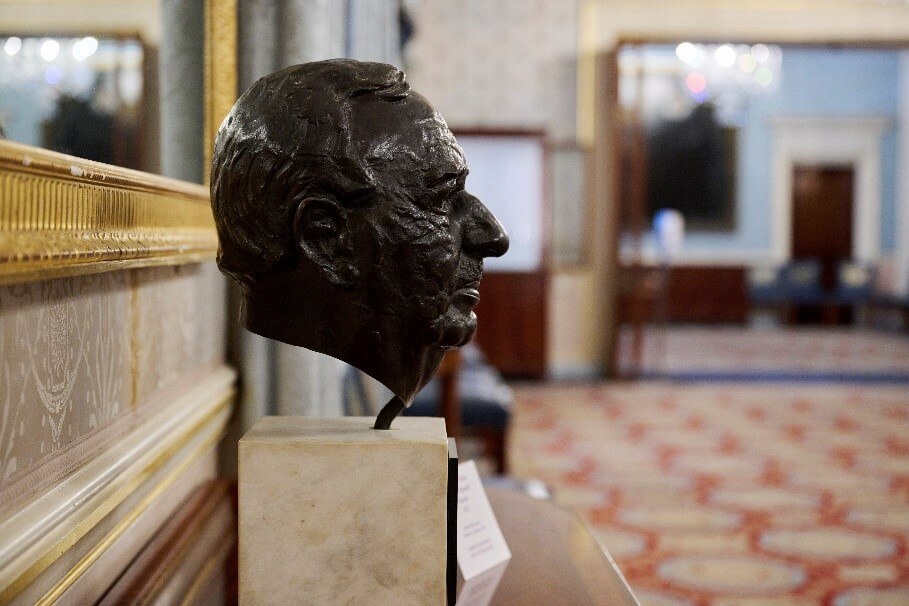 Marketing as a recognised professional skill standing in its own right is relatively new, and the idea for a City Guild for senior marketing professionals first came about in 1969. A working party was set up in 1973 and several senior Fellows of the Institute of Marketing subsequently helped gain the support of the Court of Aldermen in the City of London for establishment of a Guild. Reginald Bowden, chairman of the working party, became Founder Master, serving from 1975 to 1978. On 14 April 1978 letters patent were presented to the Guild of Marketors and it became a livery company. Reginald Bowden was followed as Master by several other members of the initial working party.

Thanks to Reginald Bowden, The Marketors’ Trust therefore established itself very clearly in the City as a charity, whose constituents were and continue to be executives with extensive marketing experience.

The most valuable and recognisable item in the Company’s collection is a bronze and white marble bust of the Founder Master, Walter Reginald Bowden. The bronze bust measures 44 cm high and the marble plinth is 15 cm high. The inscription on the plinth reads: ‘Worshipful Company of Marketors, The Founder Master 1977, Walter Reginald Bowden F.Inst.M, Presented by John K.Mcphie F.Inst.M, Junior Warden 1980’.

The bust was sculpted by Elsie McPhie, wife of Past Master John McPhie (Master 1983).
She was a talented woman who had clearly made a number of busts for key people, from the Royal College of Physicians to name a few. One of the bronzes she made was John Richmond who studied medicine at the University of Edinburgh, qualifying in 1948 and then serving in Rhodesia for the King’s African Rifles in the Second World War.

Our Master, Elsie’s husband, was in fact Richmond’s Church Elder in Sheffield.

The piece is sculpted from bronze and is mounted on a marble base. Bowden is depicted from the neck up, in contrast to the majority of traditional busts which usually contain a section of the shoulders. McPhie appears, in this work at least, to be influenced by realism and her work offers the opportunity to compare traditional nineteenth century bust designs with a more modern, twentieth century bust design. 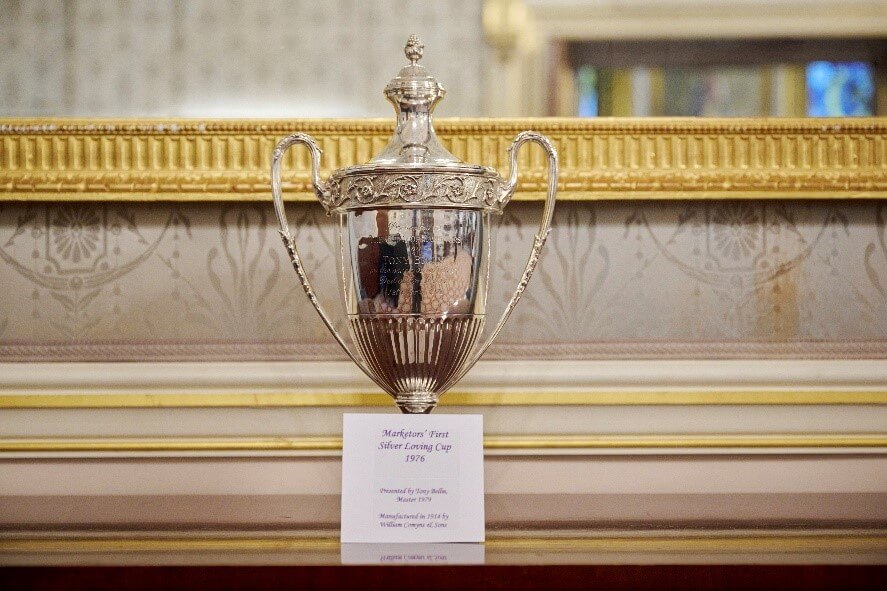 The Company received its first loving cup in 1976. Typical of loving cups, it is a sterling silver two-handled cup with cover. It stands 42 cm high and was made by William Comyns & Sons in 1914. It is engraved:

Past Master Tony Bellm (Master 1979) was the Company’s second Master, taking over from Reginald Bowden. He was the founder of a successful pharmaceutical business and had a passion for motor racing, competing for many years in Le Mans. Tony died in 2001 and is fondly remembered in the annual Tony Bellm Founders’ Day Luncheon for Past Masters and their Consorts or widows. Tony was National Chairman of the Institute of Marketing in the early 70s when Lord Mais became Lord Mayor and it was Tony who put his resources into organising the Lord Mayor’s show for Lord Mais. Lord Mais subsequently became a supporter of the Marketors and helped set us on our path to become a Livery Company.

The hallmark of William Comyns & Sons can be traced back to the 17th century and although the company no longer exists, the family has continued the tradition under the brand name of ‘Comyns’, one of the oldest and most prestigious English Silversmiths. They specialise in fine silverware and are renowned for interpretive works, particularly those of Paul De Lamerie, one of the leading silversmiths of 18th century England. From grand centrepieces to elegant tableware, each piece from Comyns combines the best of classic and modern design and the loving cup is no exception.